It was the first time I had planned to go on a trek alone with 37 strangers. I had no idea what it would be like. ‘I am my responsibility-’ this thought excited as well as scared me. With these mixed emotions I took my first step-‘home to base camp at Shigekeri’.

I had certain biased ideas about the arrangements that could have be done. But after reaching the camp site, I was awestruck. Everything I saw was very organized and neat. The base camp was set in a government school, and it had a homely environment. Ours was a team of all the age category people and it was a lovely and fun team. Every participant was welcomed warmly, all the people there including camp leaders, villagers treated us very nicely. We were all impressed by the treatment we received and the food we got(I have to say “the food was delicious”). We experienced the treatment in the following camp sites too. All the camp leaders were very friendly and homely. 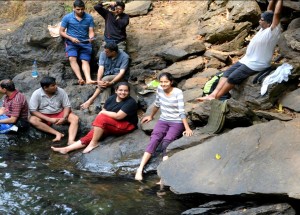 On the first day, we had a small trek to Surkalyani Gudda. It was tiring yet the sight was damn beautiful. The sunset was so soothing and we all had a photo session uphill. Next day we started at 8.30 in the morning. We had had our breakfast and had packed our lunch. The way was long. By 10 we entered the forest region. It was quite dense and throughout the forest we saw diverse flora, many beautiful sights. We climbed a steep hill to reach the lunch point. After lunch the road was comparatively less difficult to walk.  The day’s camp was organized in a farm house at Karikal, and we had to cross gangavli(bedati) river to reach the campsite. OH! It was so much fun. 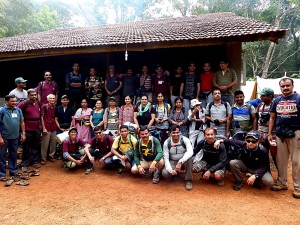 It was third day of the trek. One of the participant had quit the trek. After posing for a lovely group photo we left for one more big trek.  The destination was Motigudda. We were already told about our roads. We psyched ourselves for the big day. We started climbing the hill, and till we reached the house it was just climbing. By the time we reached our destination, we were really exhausted. Many of us had very bad shoe bites. After we freshened up, a very resourceful session by Shri Hostot Manjunath Bhagavat was organized by the camp leaders. After the lecture we sang and enjoyed to uplift ourselves for the upcoming day. 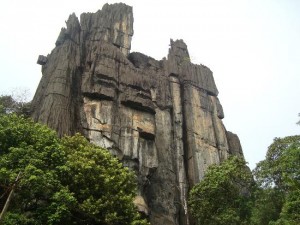 This was the day we had to walk the toughest path. We left  Motigudda by 9 in the morning. Till Vibhuti falls, the path was like previous day’s. Vibhuti falls was something to be seen. We all had a great time there. Many swam across, many rested and some like me just watched the water fall. The very next part of the trek was too hectic for many.

We had to climb a 70 degree steep mountain. It was definitely not my cup of tea. Many including me found it very difficult to climb it where as some climbed up the hill at an ease. We almost took 2 hours to climb up to the top. We had lunch at top of the hill, and the following path was quite easier. We had almost reached our destination- Yana, it started pouring cats dogs. Besides all these odds we reached Yana. After enjoying the sight of  beautiful rock formation at Yana we started towards the camp site. Reached the campsite by 6.30 pm , freshened up and as it was the last day of the trek we all sat and chatted. We all had a good talk and after the dinner we got our certificates and were all set to go to our respective houses the next day.

The whole trek was memorable. I have to admit that I came back home as a more confident and independent girl. All thanks youth hostel organization Gangotri unit for organizing such a wonderful program.