“No one realizes how beautiful it is to travel until he comes home and rests his head on his old, familiar pillow.” – Lin Yutang.
As I laid my head down at home on 17th July, the past one month just came flashing back in front of my eyes. I had read somewhere that “Travel is more than the seeing of sights; it is a change that goes on, deep and permanent, in the ideas of living.” – Miriam Beard and I could not agree less. I had experienced joy, friendship, sharing, caring, pain, saturation and all possible emotions in this journey of mine. I believe it has changed my perspectives towards life and my ideas of living as well.

The journey which began on 28th of June at Srinagar took us to various places in Leh. Pangong Tso, Nubra Valley, Chang La pass and Khardung La pass- each one has a story of its own. As we got on to Khardug La at 18,380 Ft-the highest motorable road in the world, we shivered and trembled in cold. Our bicycles awaited us and my excitement sent me even stringer sense of shivers. Well, I was riding a cycle after 5 years and look where it was! The hairpin bends, slippery gravel,I slip a stone and I am deep down in the valley where no one could ever find me. The spirit of adventure lured me and said “go for it!” Each curve, threw us into a more mesmerizing view. The weather blessed us with bright sunlight and a clear blue sky. Pedalling down 45 km to Leh city by itself was one hell of a journey. With smiling faces wishing us throughout, stopping by to click pictures at every other turn, cycling from Khardung La to Leh was worth every risk taken. Thanks to Tiger Adventures for letting us experience what cycling in mountains will be like as we all had heard only stories as to how breathtaking the experience could be. 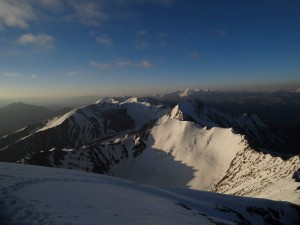 Eyes set at the peak visible at a far distance, aiming as high as the sky, all the trekkers set their journey from the land of endless discovery-Leh. The enthusiasm soared high as we drove to Stok village about 40 km from Leh, loading all the rucksacks on the top of the tempo-traveller. We hardly knew each other on the day we set out for the journey, unaware that each moment of this journey would be a milestone on its own.
As we reached Stok, we were asked to hand over the extra luggage and were given packed lunch. Well, that marked the end of so called luxury you get on a trek. We were introduced to a bunch of people from the organization who would accompany us in the trek-The trek leader-Raj Bhai, Assistant Trek leader-Vijay, cook-Billu Bhai and the local guides. I must not forget to make a special mention of the local guides. Out of nowhere we meet these young, hardworking, Ladakhi boys who speak fluent Kannada. Surprised? So were we! These boys who studied in Mysore did add the flavour of home out there on the top.

Dreams
The trek under the scorching sun, with a cold breeze every now and then, constant sound of gushing rivers as the snow melted was tedious. The path was filled with loose gravel, steep climbs. Walking in the valley between undeterred barren mountains, the clear blue sky was challenging all the spirits and enthusiasm of the trekkers. As I walked along the trails led by the local guides, I wondered how one could not believe in the creationist because it nearly is impossible for this to have happened without him. The detailing in the structure, the colours splashing on them, little living beings! What more evidence do you need? The silence within starts to speak to you and that is exactly when you rediscover who you are and can be. Well, almost when I was getting lost in these philosophical thoughts I heard a scream “Yohoooo, its Chang Ma!” it is at an altitude of 13080 feet. It was 4.5 hours we had started off from the village, I barely noticed. Our team was already there setting up the cooking and dining tents. My friends and I decided to rest for a while and climbed up a small rock to have a better view. Phew! With prayer flags fluttering, river flowing furiously by the side, rare unknown species of the birds chirping seemed surreal. In no matter of time we were served hot tea and we were all set to set up our tents. By 3 o’clock we were set with our tents and so was our hot lunch. The whistle was blown “TTH Trekkers, lunch is ready”. We all hogged as if we had seen food after a lifetime and the food tasted the best. To avoid mountain sickness it is always advised not to retreat into the tents and so we all decided to play. Football, throw-ball or just running around-we just had to remain active mentally and physically.

After tea we were asked to assemble and were explained about the rule “climb high-sleep low” which would help us avoid any altitude sickness. So, with water bottles in our hands all of us set for an hour’s climb. Tired, drained out we reached the top of a small hill which had a Stupa and was filled with colourful prayer flags- a perfect place for a group photo! Say cheese! By the time we came down to our tents we were served with hot soup and dinner. It was just a couple of days away from full moon; the moonlight made the night mesmerizing. The tall mountains lit with silver light, the chill breeze and the flowing water, neighbours singing old hindi songs faded as we cozied in our tents and slipped into our warm sleeping bags.