With hot tea served at 6, it was an early bright day. We packed lunch, filled our bottles with water, folded our tents and loaded them on the mules. We left for our next camp at Mankarmo which was about the height of 14200feet and an estimated walk was about 3.5 hours on an average. We all started our journey towards the camp. It is always the beginning which is hard. Your legs hurt, stomach cramps, heavy heads, panting to just catch a small breath and your heart pounds so loud that you doubt if your trek mate walking beside you can hear it struggle!

However, this walk was easier than the walk to Chang Ma. The path was mainly on the river bed, on the gravel than any steep climbs. However, the ankles hurt after you end up balancing on these rocks for about 3 hours. We had our share of laughter, teasing, silence and breaks on our way. All of us chose walking partners on our way with whom we could keep pace with. Frequent water breaks, rucksack breaks, sit stare and wonder what we are doing breaks finally led us to the camp. We could see the camp at a far distance as soon as we crossed a stream where the guide stood to guide us the direction. Well, that walk from the point where we could see the camp till the camp seemed never ending. It took us almost an hour to reach Mankarmo from there. 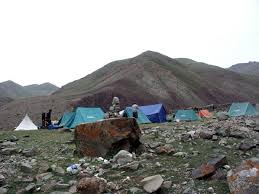 What welcomed us was a herd of wild blue sheep-alert, scared and jumping in the mountains. The old and the young were equally agile to run in those barren lands in search of food. Such a treat! I spent an hour and a half waiting for at least one of them to come closer so that i get a click with the celebrity of the mountains. The routine of setting up of tents, cooking began at the campsite and few of us decided to play cards. There were a few foreigners who were returning from the summit and we were more than enthusiastic to listen to their experiences. Just a hope to get some encouragement and to believe that I will be able to do it I guess! The games and activities kept us all on our toes pre and post lunch.

As soon as tea was served in the evening, we were up for an altitude gain of the day. Shimith, our guide for that day decided to take us all on a trail so high and difficult that somehow we all managed to climb it, but getting down proved to be a Herculean task. Each one of us slipped, tripped, held on to all possible supports, screamed, cursed while climbing down. I was helped by Vijay Bhai to step down slowly and after a while I could do it on my own. All our boys climbed up again to provide a helping hand. Well, another lesson in the mountains learnt. We learn to lend a hand in support to the fellow beings. How often do we do it back at the place where we live? Every one of us was so drained that day that all of us were in deep sleep soon after dinner. The moon shined like ever over us and it was a good night indeed.

Mankarmo to Base camp: The final destination.

This was our final walk before we went towards the summit. We were given packed aloo, juice and chocolates. The trek was difficult as we were all tired due to the previous walks, and the route was to a height of 16300feet. I preferred to walk alone that day as even saying “Hi!” would have wasted energy. The walk on the uncertain paths, unknown regions in silence gave me solitude. I sighted colourful birds, blue sheep and Indian marmots as I walked. I had to stop every 50 steps to take a sip of water. I must say one way to push you while trekking is count the number of steps you take before you stop, reinforce yourself and then push an extra 10 or 20 steps for the next time. Might work as it did for me throughout! 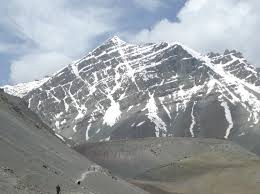 The guide kept motivating saying we were almost there, just half an hour more, even asked us to imagine crossing just another Chamundi hills. Even Chamundi hill would have looked like Mt.Everest that day! After what seemed like a never ending task I saw the base camp. The happiness knew no bounds, screaming on top of my voice in my mind and treaded towards the tent. Just a few teammates had arrived and I joined them for a cup of rejoicing tea. Hot burning sun outside made us all take shelter in the tent that day. Lunch and tea was served at about 3 o’clock and as some decided to play cricket, some of us wanted to lay back and chat till sun became less harsh. The trek leader decided to take us for altitude gain in the same route we would be taking for the summit the next night. The group started off with great enthusiasm and most of us reached to the top of that hill in a span of 1 hour. The top was freezing cold in the evening with a strong cold breeze rising from the tall snow clad mountains right behind it. We all stood in awe staring at the gigantic Stok-Khangri behind us and wondered what it would be even to take a step towards it.

As we came back that day most of the team members were apprehensive and remained silent. My mind wandered everywhere and questioned whether I should go ahead, am I doing this right, do I have it in me to even attempt this? Later in the evening, I met two guys from Karnataka who were attempting to summit that night. I wished them both luck as we headed towards our tents for dinner and to catch up on a good night’s sleep.