If it is not the right one, then it is …

Don’t worry if you completed the sentence with the words wrong one,.  We are all tuned to discriminate things as right or wrong, good or bad etc., But, we could also consider the option of , say,  if it’s not the right one, it is the left one.  Opposite of right is wrong and left, as well.

Our language and words exhibit our preferences and bias so eloquently. Yet, we don’t notice them many times.  Take for instance the bias against the left in preference to the right. Over many centuries and across regions and various cultures, this phenomenon can be seen.

Dexter is the Latin word for right hand. Dexterous signifies being skillful. So, ambidextrous means one who is skillful with both hands.  The Latin word for left hand is sinister, which in English means threatening, evil or dangerous. Similarly, the French word gauche, simply means left handed whereas in English we use it to refer to tactlessness and such negative traits. The French word droit, ( you guessed it… stands for the  Right Hand) is the root for adroit, which is being skillful, clever, quick-witted etc., Nearer home, our own Kannada word for the right side is bala, which also means strength. Might is Right ( or is it Right is might?) !

Even in matters of political thought, the old, traditional (and so acceptable?) ideas are termed rightist and the radical, new and yet to be accepted ideology was the Leftist.

We follow the right path; say those who use the right side of the road for vehicular traffic.  Now, this is the norm in most countries except some of the commonwealth countries. There’s an interesting story about this. 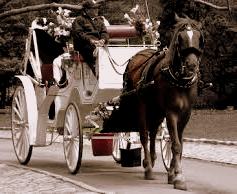 Years ago, horse drawn carriages with guards on horseback were the normal mode of transport in Europe and the British isles. Typically, swords were kept on the left side so that the guard could easily pull it out with his right hand. Since the sword used to hang and project on his left side, it was convenient for the carriages to ride on the left side with the guards on the right side of the carriages.

Everything was fine till Napoleon decided that the French will not follow this British custom and ordered that the traffic will be on the right side. And, since he had control over much of Europe, traffic on the right side became the norm. Poor guards had to struggle till the mode of transportation was upgraded and carriages and guards became obsolete.  So, what started as a reaction is being hailed as the “right” way!

This right of the Right did not go unchallenged.  Many items of common usage, such as the cheque books were issued with the counterfoil on the right side to facilitate usage by left handers. August 13, is declared as World Left handers day. There are special merchandize for the ease of use of left handers.   Many cinema stars, sports persons and great persons have made it fashionable to be left handed, the latest celebrity being our own Prime Minister.

Not to forget that when Neil Armstrong stepped  on moon, he set his left foot first.  A small step for man, but a giant leap for mankind, indeed.